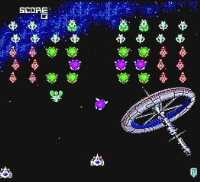 Based on the classic 80's shooter and a port of the arcade's Galaga '89 (the only thing changed is the year). Little insects fly into formation at the top of the screen and your ship at the bottom must blast them while moving left and right to dodge their shots and kamikaze dives (no up or down movement). Some enemies can capture your ship with a tractor beam, but if you blast its captor you can free your ship for double (or triple) the firepower.

Gameplay: 90/100
All the frenetic action of the original Galaga with new gameplay features. The basic game is the same; the enemies fly into formation and then dive at you one by one. Blast them all and you clear the stage. The bonus rounds with the madly weaving ships are intact, too. Everything has received minor upgrades, though. There are several new enemy types, like the metallic crabs that can shield the rest of the swarm or the fish that can merge into one larger, more powerful creature. You can grab warp field generators to take you to a harder version of the next stage with different enemies. The bonus round targets now dance in time to any of several classical pieces. If you free two docked ships that were captured with a tractor beam, you can combine with them to get a triple shot. There are even scrolling sequences and bosses. G90 is every bit as addictive as the original, because it remains faithful to the proven formula.

Graphics: 90/100
The graphics were naturally upgraded as well. The enemies and backgrounds are very colorful, and the fireworks-like explosions are fantastic. The look is a pleasant mix between cutesy Japanese style and the seriousness of rendered graphics. The animation for rotating enemies is very smooth. This game is as much a pleasure to look at as it is to play.

Sound: 80/100
Although the audio is nothing to get excited about it certainly doesn't sound bad. The sound effects consist of little pops for exploding enemies and zapping sounds for the shots; very simplistic but completely appropriate for the game. There is no music in the main stages but in bonus rounds classical tunes play (and the enemies are choreographed to move in time with it - quite amusing).

Overall: 90/100
The tone isn't quite as serious as the original's but perhaps that's one of G90's most endearing elements. It doesn't hurt that it's really addictive, either. The addition of new enemies and different paths between the stages adds an element of exploration to what was once a game played strictly for the gameplay. It may be difficult to track a copy down, but you can sample some of the bonus stages on the Playstation's Ridge Racer Revolution. Then I recommend putting forth any effort necessary to locate this card. I wouldn't blame you if you brag about it to your friends; a modern game with classic gameplay is a rare find indeed.